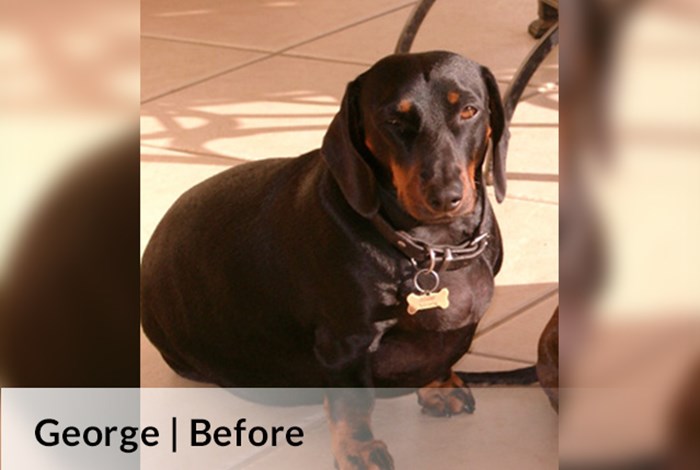 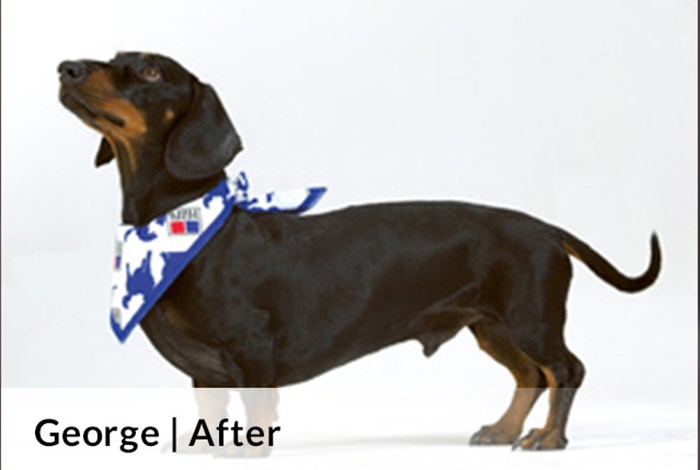 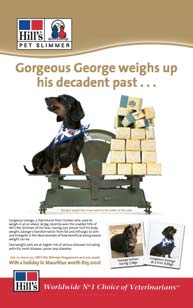 George paid a visit to the vet, suffering from a painful shoulder, and veterinarian Dr Peter Carey of Glenashley Veterinary Clinic recommended the Hill’s Pet Slimmer programme. He advised owners Christy and Mark Ovenstone that George weighed double his optimum weight, and said that this could cause a heart attack or damage his spine. “We were very upset,” said Christy. “We just hadn’t realised how dangerous it was for George to be fat.”

George, seven years old, had steadily piled on the pounds over the years said Christy. “He was always a greedy little dog, gobbling down his own and then our other dogs’ food. He’d eat anything, even an onion if you gave him one.”

Christy says that George lost about a kilo a month eating a special Hill’s reduction diet for obese dogs (Hill’s Prescription Diet r/d) which contains a special fibre to help the pet feel fuller for longer. “At first when I dished him up this small cup of pellets he’d look at me as if to say ‘so where’s the main course?’ But he loved the taste and would wolf down each meal, which we measured carefully to make sure he was getting exactly what he needed.”

“We watched him like a hawk, and he kept on losing weight and getting livelier and more energetic. The only time he didn’t lose was during avocado season, as he’d pig out on any avos that fell from the tree in the garden.”

Christy says that George’s tummy dragged on the floor, and he used to sleep all day in the shade, unable to jump on the beds or couch. These days he can jump with ease and runs around the garden chasing birds, moles and dragonflies. “He no longer limps and is full of life. He’s like a puppy again.”