Milo minimizes to almost half his bodyweight. 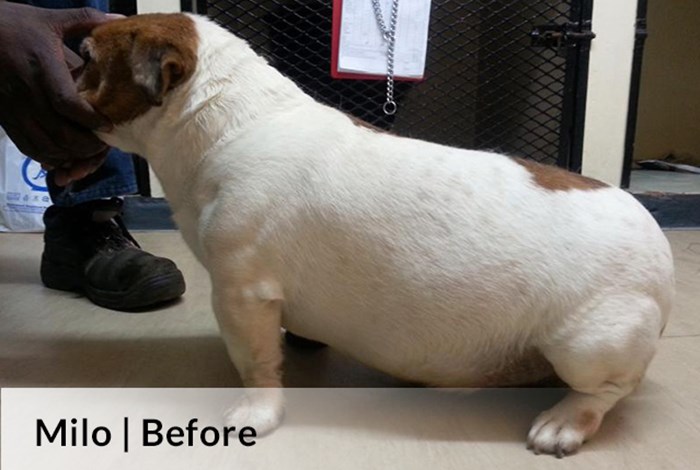 Our Milo is a nine-year-old cross between a Dachshund and a Jack Russell. In March 2014 Milo went to Bakenkop Animal Clinic to treat an abscess. The veterinarian recommended that our ‘not so little’ Milo join the Hill’s Pet Slimmer programme.

Initially, the weight loss programme was a bit of a change. Milo is a greedy dog. He’ll eat anything – lettuce, olives, anything that falls on the floor. And his food used to be available all the time. I’ll admit he also enjoyed things like a morning rusk with his mommy. And if that wasn’t enough he still tried to steal food from the other dogs!

We needed to start feeding Milo separately and portion out his daily allowance into two meals. Milo loved his new food and quickly got into the routine of meal times - looking forward to every one of them. He still loves to eat and anything edible that was dropped on the floor would be vacuumed up in a moment if not picked up quickly enough.

Milo did very well on the programme which showed in the centimetres and kilograms lost as well as him becoming a healthier, happier and more energetic pet. I think the best part for Milo is being able to jump on the couch without any assistance. He’s much, much, much more active. He only used to lie on his back when he was fat, it was too uncomfortable to lie on his tummy. Now he lies on his tummy all the time.

The transformation was rewarding for us all. Milo was supported and encouraged by Bakenkop Animal Clinic and Hill’s, rewarding him with gifts that kept both him and us motivated.

After a year Milo had lost almost half of his bodyweight; 6.5kg, 16cm around his chest and 26cm around his waist. We have such faith in this new food that we will be maintaining Milo on Hill’s Metabolic for life and have introduced our other Jack Russell to it as well.

Thank you Sister Cindy for enrolling Milo into the Pet Slimmer clinic, monitoring his progress, introducing us to the Metabolic diet and most importantly for all the support during this long but rewarding journey!